Income matters to our health—for all of us, not just people at the top or bottom. Though middle class Americans are healthier than people who struggle to make ends meet, they're not as healthy as those with higher incomes. And, even wealthy Americans are less healthy than those with the highest incomes.

The connections are striking.

What explains the strong ties between income and health?

People with less income and wealth are less able to pay for health care or health insurance. They are also less likely to afford an education, healthy lifestyles, or safe and healthy neighborhoods. Economic hardship makes people more vulnerable to diseases and to harmful biological effects of stress. Children are particularly at risk—with poor life conditions affecting their physical growth, brain development, and future risk of adult diseases, such as diabetes and heart disease.

Can income-related policies affect our health?

Government policies affect the income and health of Americans, as do the policies and practices of businesses, employers, developers, advertisers, and philanthropists. Our society's debates and decisions about the best way to grow the economy, reduce unemployment, and promote high-quality jobs also have direct implications for our health. These include enabling small businesses to thrive and take on new workers, providing tax credits and sick leave to working parents, and bolstering wages, earnings, and savings. Policies with the strongest evidence include those that:

People with low incomes are more likely to have inadequate health insurance, to struggle accessing quality medical care, to live in neighborhoods that lack primary care providers, and to have difficulty affording deductibles, copayments, prescriptions, and other health care expenses.

Policies that promote access to quality care for the underserved can improve population health.

Obesity, diabetes, and other chronic diseases are affected by lifestyle, such as diet and smoking. People of low income have greater food insecurity and tend to live in food deserts (too many fast-food chains and corner stores and too few supermarkets and restaurants that sell healthy foods). Low-income Americans get less exercise, often because they live in communities that lack parks, sidewalks, and other features that encourage pedestrian activity.

Policies that strengthen access to nutritious foods, improve the built environment, and help the poor get help for smoking, alcohol, or drug dependence are critical.

Low-income and minority communities are more frequently targets for advertising of tobacco, alcohol, and high-calorie foods, often targeted to youth.

The health of low-income people can be affected by unstable housing and homelessness; they must often live in lower-cost apartments and houses that expose occupants to indoor pollutants (e.g., lead-based paint, asbestos, dust mites and other allergens), which increase the risk of asthma, lead toxicity, and other health problems.

Policies that attract redevelopment and construction of healthy housing can promote the health of residents.

Low-income persons are less likely to own a car and are more likely to live in areas that lack affordable public transportation. This limits access to jobs with health benefits, supermarkets that sell healthy foods, reliable childcare, or a good physician.

Policies that promote affordable and reliable public transportation can increase access to jobs and services.

Children in low-income families have poorer access to good schools and are less able to afford college tuitions. The weaker tax base in low-income neighborhoods limits resources for public schools, whose students are less likely to graduate or earn competitive jobs.

Low-income residents often find themselves living near busy highways with high levels of vehicle emissions, factories with billowing smokestacks and harmful waste water, bus depots, and other sources of air and water pollution. Children living in these neighborhoods often have higher rates of asthma and other respiratory ailments.

Ages 0-3 are a critical period of growth and development, but children raised in low-income neighborhoods face greater degrees of stress and adverse childhood events (ACEs). The stress may cause altered brain development, disruption of the immune and endocrine systems, and a heightened risk of adopting unhealthy behaviors to cope with stress that can lead to obesity, smoking, and other risk factors. Children exposed to ACEs have higher rates of diseases as adults, such as heart disease and diabetes, and their education and career opportunities are often affected.

Policies that encourage investments in early childhood can help put children on a path for success and better health.

Policies that strengthen the economy can improve wellbeing and public health.

For many years, the net worth and earnings of the top 1% of Americans have risen more sharply than the earnings of the rest of the population, causing widening income inequality. Social and economic mobility—the ability of poor people to climb the economic ladder—has lagged in the United States for decades. Widening inequality is bad for the economy and a number of studies suggest that inequality harms health, independent of the effects of absolute income.

Policies that promote economic opportunity for all Americans can close the gap.

Low-income neighborhoods tend to have higher rates of violent crime, which exposes residents to greater risks of injuries and homicides and to higher incarceration rates.

Policies that curb crime and address the root causes of violence can save lives.

Our health is affected by the vitality and social cohesion of our neighborhoods. The health and economy of U.S. communities profit from investments and policies that attract commerce and foster jobs, good housing, better schools, green space, and transportation infrastructure. Disinvestment in low-income communities perpetuates poverty and its health effects and social ills, including crime, persistent segregation, and social and economic isolation.

Policies that encourage economic development and empowerment can improve the wellbeing of communities.

The VCU Center on Society and Health and the Urban Institute have developed two in-depth issue briefs as part of a joint initiative to raise awareness about the connections between income and health. The issue briefs include:

How are Income and Wealth Linked to Health and Longevity? Examines the many complex causal pathways linking income and health. 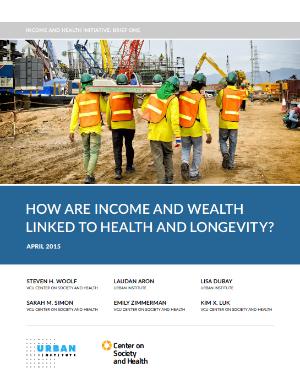 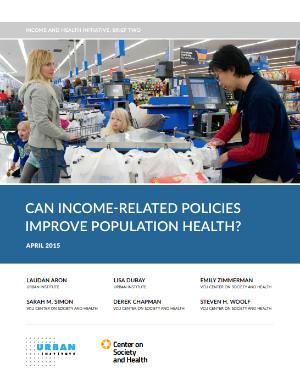 Health of the States

The Cost of Firearms Violence