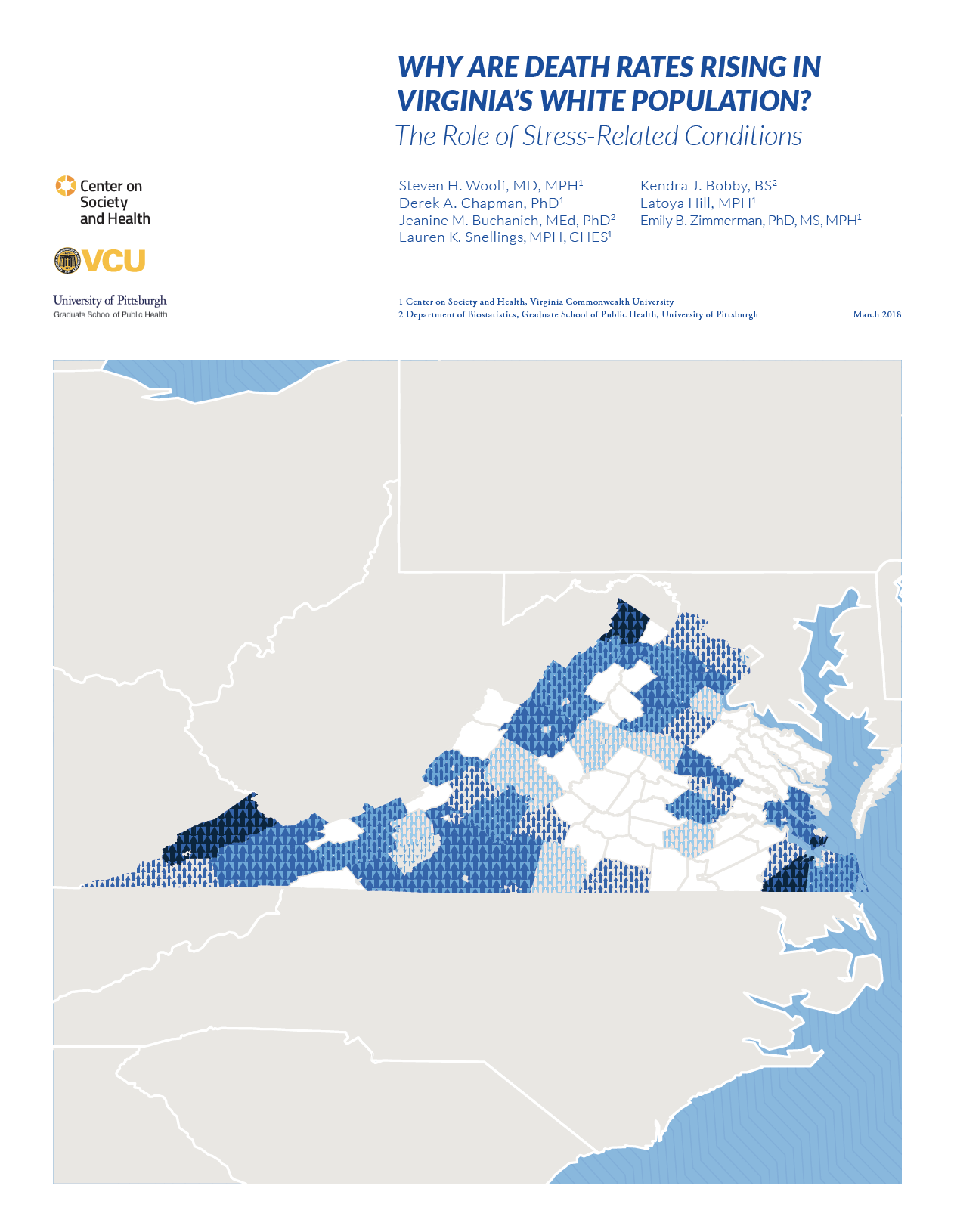 Studies in recent years have reported a decline in US life expectancy and rising mortality rates among middle-aged Americans. A leading factor has been an alarming increase in accidental drug overdoses, but an increase in other so-called “deaths of despair” (e.g., deaths from alcohol abuse and suicides) has also been reported.

These deaths point to an insidious public health crisis with national implications. As life expectancy falls in the United States, it continues to increase in other high-income countries. Understanding the root causes is urgent.

In 2016, the VCU Center on Society and Health partnered with the University of Pittsburgh to undertake a series of studies to examine, in greater detail, the causes of death contributing to this rise in midlife mortality, the places most impacted by this trend, and the population groups most deeply affected.

We began by studying middle-aged whites, the population that early research had identified as most impacted by this trend. (Prior studies had indicated that populations of color were not experiencing an increase in “deaths of despair.”) The California Endowment funded us to examine whether white mortality was increasing in California and, for comparison, in Minnesota and Virginia. Foundations in Missouri and Kansas learned of this work and asked us to replicate the analysis in their states.

For our analysis of these five states, we partnered with the University of Pittsburgh Graduate School of Public Health, which manages the Mortality and Population Data System (MPDS). Together we conducted a meticulous analysis of more than 100 causes of death from 1995 to 2014.

The results appear here. They include, for each state, an issue brief that summarizes the findings and a technical supplement with more detailed data and methods. They document an increase in white mortality from “stress-related conditions,” beginning in the 1990s and affecting adults from their 20s to their 60s. The increases were concentrated in regions and counties that had experienced prolonged periods of economic distress.

In 2018 the Center extended its analysis to the entire US population with a focus on comparing trends across racial and ethnic groups. This effort was stimulated by recent reports suggesting that the rise in drug overdoses and other causes was not, as previously believed, restricted to the white population.

Our unprecedented analysis, published in The BMJ to an international audience, showed that midlife death rates are climbing for multiple conditions, not just drug abuse, and that this is happening in cities and rural areas across the nation, among whites and non-whites. The increases in mortality are affecting multiple body systems and striking multiple racial and ethnic groups, offsetting years of progress in lowering death rates among black and Hispanic adults.

Finding the cause of this alarming trend is urgent. Our work suggests that the opioid epidemic is the tip of the iceberg. No single factor can explain the sweeping decline in US health involving multiple body systems, mental health, and injuries. We believe the results suggest a systemic cause and plan to conduct follow-up research to explore potential explanations.

Hear about our preliminary findings on NPR

Read the BMJ article: "Changes in midlife death rates across racial and ethnic groups in the United States: systematic analysis of vital statistics"