Life Expectancy and Mortality Rates in the United States, 1959-2017

This study examined data from the US mortality database and CDC Wonder to better understand state-level trends in life expectancy and mortality from 1959 through 2017. Authors Steven Woolf, M.D. and Heidi Schoomaker, M.Ed. found increases in mortality rates for 35 different causes, and the most dramatic increases in deaths taking place among Americans ages 25 to 64. 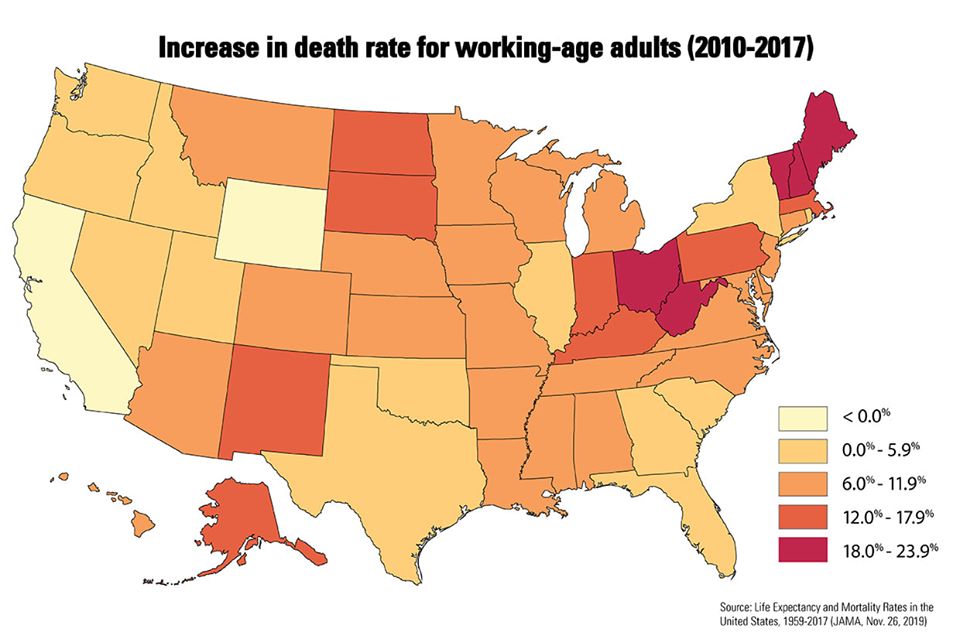 The major causes of death on the rise include drug overdoses, alcohol abuse, suicides, and an array of organ system diseases. Geographically, rising death rates were concentrated in Rust Belt states, Appalachia, and northern New England. Country-wide, the increases in death rates have been large enough to offset medical gains in other areas, and have led to a decline in U.S. life expectancy since 2014.

The study follows an earlier paper published in the British Medical Journal (BMJ) that showed increases in U.S. mortality rates among all racial & ethnic groups (earlier studies had only found increases in the non-Hispanic white population).

These findings are particularly alarming – the number of causes of death on the rise as well as the age group impacted (working-age adults), has broad-reaching implications. According to principal investigator Steven Woolf, “Working-age Americans are more likely to die in the prime of their lives. For employers, this means that their workforce is dying prematurely, impacting the U.S. economy. More importantly, this trend means that children are losing their parents and our children are destined to live shorter lives than us.”

Further research is required in order to tease out the underlying causes, however, the study lists socioeconomic pressures and unstable employment among possible explanations for increased working-age mortality in these areas, and recommend investments that improve access to education, economic opportunity, health care, and housing.

Read the report in JAMA