Education: It Matters More to Health than Ever Before

Americans with fewer years of education have poorer health and shorter lives, and that has never been more true than today. In fact, since the 1990s, life expectancy has decreased for people without a high school education, and especially white women.

Education is important not only for higher paying jobs and economic productivity, but also for saving lives and saving dollars.

Policies that set kids up for success—in education and life generally—are smart strategies for reducing the prevalence of chronic diseases, such as diabetes and heart disease. More education leads to higher earnings that can provide access to healthy food, safer homes, and better health care. And policies in communities can help put children on track for better health and prosperity by strengthening schools, job opportunities, economic growth, safe and affordable housing, and transportation.

Medical care is important, but actions outside of health care—education, jobs, and economic growth—may be the best way to stem spiraling health care costs ("bend the cost curve"). Disinvesting in education not only makes U.S. businesses less competitive in a global marketplace built on science and technology, but can also increase health care costs in the long run.

"Saving" money by cutting vital "non-health" programs can cost more in the end. We don’t help ourselves by creating a sicker population and workforce that require more expensive medical care.

Now, more than ever, people with less education face a serious health disadvantage

Education and health have always been linked, but never as greatly as they are now. For more than two decades researchers have noted a disturbing widening in the gradient: year by year, scientists have warned that the health gap between those with and without an education is growing ever larger. [See table]

The widening gap in disease prevalence: Changes in life expectancy based on education are only the tip of the iceberg11 because they reflect a widening gap in sickness levels—the prevalence of the diseases—responsible for these deaths, such as heart disease, cancer, and lung disease. People with a poor education are more likely to struggle with chronic diseases.

In 2011, Rand Corporation researchers compared data for non-Hispanic whites (age 40-64 years) between 1978 and 2005.12 Among those without a high school education, the proportion who reported fair or poor health differed from college educated adults by 25% in the 1970s but grew to 36% by 2004. During these same years, non-Hispanic whites with advanced education experienced declines in chronic diseases such as arthritis, heart disease, lung disease, high blood pressure, and diabetes. However, non-Hispanic white adults with less education saw no such decline; they even experienced an increase in some conditions, resulting in a widening in the education gradient. [See Figure 1] Reports of fair or poor health increased among people with these diseases who had less than 12 years of education.

The widening gap in disability: The ratio between the disability levels of those with grade school education (0-8 years) and those with some college education (13 or more years of education) increased between 1970 and 1990 among whites of both sexes and African American men;4 the pattern for white men is shown here. [See Figure 5]

Americans without a high school diploma are at greatest risk

High school dropouts: a population in declining health. Although health and life expectancy have improved for most Americans over time, the reverse is now happening among those who do not finish high school: their health is declining. Increasingly, the loss of a high school diploma marks the loss of a healthy life and matriculation into a population destined for greater illness.

The evidence is building:

What’s happening?
A selection process is underway in America. Increasingly, non-graduates of high school are becoming a smaller and increasingly disadvantaged population.13

The plight of women: the high price of a lost education. The above examples show that decreases in life expectancy among whites without a high school education are occurring more sharply among women. Women without a good education appear to suffer greater health setbacks than men.

It was not always this way: for decades, the link between education and life expectancy differed little by sex,3, 14 but after 1990 life expectancy began to increase more slowly for women than for men.2, 7 Death rates in 1986-2002 declined among college-educated non-Hispanic white women but increased among those with 0-11 years of education.15, iii [See Figure 8] Other evidence suggests a link between education and physical illness, heart disease, and depression that is greater among women than men.16, 17

Why is this? The reasons for the greater impact on women, particularly white women, remain unclear. One explanation is resource substitution theory, the hypothesis that “education improves well-being more for women, because socioeconomic disadvantage makes them depend more on education to achieve well-being.”18 However, evidence that women depend more on education for their health and survival than men remains inconclusive.19

Whatever the reason, the trend is worrying and consistent with other reports of a health disadvantage among American women.

Compared to those with a college education, Americans with less education:

Education and length of life: Education affects life expectancy. At age 25, U.S. adults without a high school diploma can expect to die 9 years sooner than college graduates.9 And a recent study found that college graduates with only a Bachelor’s degree were 26% more likely to die during the five-year study follow-up period than those with a professional degree. Americans with less than high school education in this study were almost twice as likely to die in the next five years than those with a professional degree.19 With every year of additional education, the probability of death decreases.iv, 22 [See Figure 10]

Education and the next generation’s survival: A mother's education affects her children. Babies whose mothers have less than 12 years of education are nearly twice as likely to die before their first birthdays as babies born to mothers with 16 or more years of schooling.23

It's a recurring pattern that begins at birth—with higher rates of low birth weight among low-educated women9—and continues throughout life. Adults with less education are more likely to report diabetes and heart disease and to have diminished health status.9, 10 [See Figure 11] [See Table 1]

Education and workforce productivity for U.S. businesses: along with higher rates of disease, Americans without a high school education have dramatically higher rates of physical disabilities, such as inability to climb steps, stand, stoop, or lift large or heavy objects. [See Table 2] A good education is important to work productivity on many levels, not just in cognitive skills but in the basic measures of functional status.

Education and psychological wellbeing and mental health: Stress is higher among poorly educated Americans. Compared to people with a Bachelor’s degree, people without a high school diploma are more than four times as likely to report being nervous and six times as likely to be sad “all or most of the time.”v, 10 Somatic pain complaints that are related to stress or depression, such as headache and back pain, are also more common among Americans with less education. [See Figure 12]

Mortality differences across sexes and races have been falling at the same time that socioeconomic differences in mortality have been rising.7 Increasingly, education—and the social factors associated with education—are transcending the influence of race on health. Blacks with more education have longer lives than whites with less than a high school education. Racial disparities persist—highly educated blacks (at least 16 years of education) live 4 years less than comparably educated whites—but they can expect to live 8 years longer than whites with less than 12 years of education.1

What's the cause? Why does education matter more to health now?

The “downstream” benefits of a good education: In today’s knowledge economy, Americans with limited education face greater economic challenges. [See Figure 14] A strong education is vital for the best jobs and higher earnings (see box below). The health benefits that accrue from a good education often occur “downstream” after leaving school, such as better health insurance, access to medical care, and the resources to live a healthier lifestyle and to reside in healthier homes and neighborhoods.

Technological innovations, globalization, and outsourcing of jobs that were traditionally domestic have sharply lowered demand for low-skilled jobs, “contribut[ing] to the decline in the relative wages of unskilled workers.”24 Skills and educational attainment are thus increasingly important in today’s economy, which has progressively been shifting from
a manufacturing-based economy to a service-based economy and the growth of industries requiring workers with advanced knowledge of science, technology, and mathematics and skills in professional disciplines such as law, business, and medicine.25

Current statistics underscore the importance of education to jobs and earnings in this environment [See bar chart]. Americans who lack a high school diploma have the highest rates of unemployment (12.4%) and the lowest median weekly earnings ($477 per week), whereas workers with professional degrees had the lowest rate of unemployment (2.1%), and the highest median weekly earnings ($1,735 per week).26 College graduates earn twice as much as high school graduates, 84% more over a lifetime.27

College graduates enjoy greater economic mobility and greater potential to “climb the income ladder.”28 According to the Brookings institution and the Pew Charitable Trusts, 74% of adult children with college degrees [have] incomes greater than their parents.29 Not so for workers with less than a high school education, whose wage growth is more stagnant. The average 50 year-old high-school drop-out earns $16.50 per hour, only $3.75 per hour more than a young high-school drop-out ($12.75 per hour).30 Workers without a high school diploma are more likely to be among the “working poor” (20.1%) than high school graduates, even those who have not earned college degrees (9.2%).26

“Upstream” factors shift the odds for success—in health and education: Children who grow up in struggling, stressful homes or neighborhoods pay a double price: the living conditions disturb their education, but the stress can trigger lasting biological effects and cause youth to take up unhealthy or risky behaviors as coping mechanisms, such as smoking or violence. Early living conditions shape health trajectories for a lifetime,31 not just success at school.vi Low-income neighborhoods with weak tax bases often have failing schools that lack the resources and teachers to offer a good education. The correlation between educational setbacks and poor health may have more to do with these root causes, which begin taking their toll even before children reach grade school. 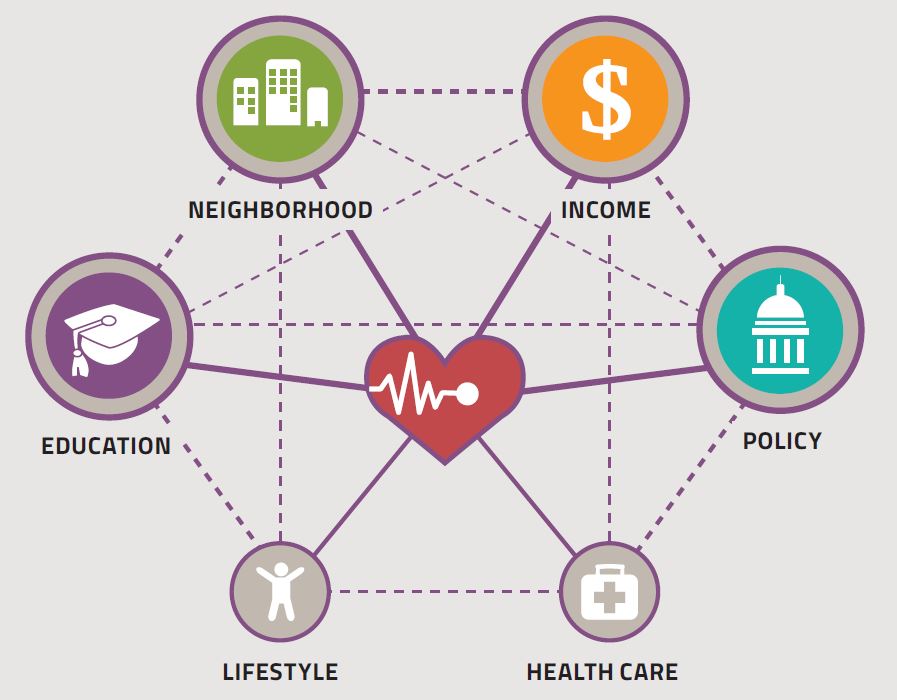 Education matters to health, and so do the conditions in neighborhoods and communities that harm the health of young children, trigger unhealthy or risky behaviors, and undermine the success of students and schools. Policies that address early child care, housing, transportation, food security, unemployment, and economic development are important to both education and health.

Education: It Matters More to Health than Ever Before is part one of the Education and Health Initiative, a four-part series seeking to raise awareness about the important connections between education and health. Learn more about the initiative here, and explore the other phases below:

Why Education Matters to Health: Exploring the Causes: An issue brief, video, causal model, and expanded web content exploring the association between education and health has deeper root causes, such as the economic and social conditions young children experience before reaching school age, the skills and networks they build as they mature, and the jobs and resources they can access later in life.

Education and Health: The Return on Investment: A series of issue briefs arguing that spending more to educate our youth could save more on health care costs, and that the reverse is true: cuts in education to "save" money ultimately drive up health care costs